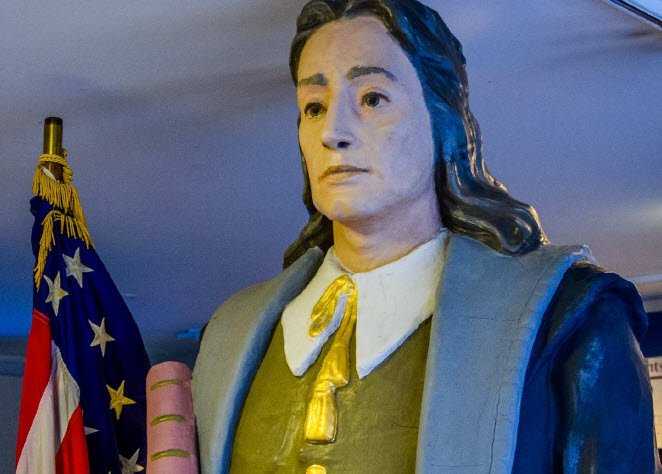 Everywhere I go, I have a natural curiosity about all kinds of things. I always wonder about the people that have passed. The benches in memorial to loved ones passed, hold a particular fascination for me. I want to learn about those people, talk to their families and get to know who they were.  Sometimes just wandering about an old cemetery will get me wondering about the people laid to rest there and what their lives were like during their timeframe. I really want to add a category to this blog titled “Dead people from the Road” and I just might.

The man, the myth, the legend – Who was Roger Williams anyway.

Today I want to talk about Roger Williams the founding father of Rhode Island.
Of all the people I wrote about in my book, Roger Williams has elicited the most comments so far. A few months ago, after my boyfriend read the chapter on Rhode Island in my book Lessons from the Road: USA (Yes that is a shameless plug) he came to me very serious and said, “I have to see the root.” I was surprised but I knew exactly what he was referring to. Without missing a beat, I said, “OK let’s go today and see that root.” And that is just what we did.
On the way to Providence Rhode Island, I discovered that there is a small national park setup just for Roger Williams called the Roger Williams Memorial Park. I hadn’t realized that there was a national park dedicated to Roger. I now had a new discovery. It also provided an opportunity for me to get another stamp for my national park passport book.

We get there and it is a small park, but nicely appointed. There were rangers at the national park, Josh and Lauren. They were awesome. We talked for a good 30 minutes about Roger. I learned a few new things about Roger that I didn’t know.

I knew that ironically he had to leave the Massachusetts Bay Colony because he wanted to practice religion the way he wanted to and those goobers in Massachusetts were just too strict in their dogma to allow any other thoughts other than their own. It’s ironic because those goobers in Massachusetts had originally left England because of religious persecution. That’s ok, their inability to play nice in the sand box ended up expelling both Thomas Hooker who is the founding father of Connecticut and Roger Williams who is the founding father of Rhode Island. Where would be without Autocrat Coffee syrup and warm lobster rolls, just saying.

What I didn’t know what that he was in fact a ‘seeker’ of beliefs. He believed that anyone should be able to practice religions anyway they want. He had what the rangers referred to as a Soul Conscience. In Providence during Roger Williams time if someone did not respect another’s rights of soul conscience, than that offending person would lose their right to vote. Evidently that was the harshest punishment exacted on people in Providence.

Ranger Josh talk about how when the English came to the New World they were impressed by the native people due to the fact that they ate venison. Deer in England was only hunted by royalty, punishable by death. When the native people were providing it at meals, the English felt that they were in the presence of royalty. I thought that was a cool little tidbit of history that is seldom told.

Where is Roger Now?

I had been asked a couple of times “Where is Roger buried now?”
The answer is on the NPS.gov website in FAQ’s
”A. Roger has been laid to rest three times!!!!!!
1. Roger was first buried behind his house on Towne Street at what is now North Main Street.
2. In 1860, his remains were moved to a family crypt in the Old North Burial Ground. A committee was formed to create a memorial to Williams and they selected Prospect Terrance as a suitable final resting place. However, funds were meager, the Civil War intervened and no action was taken.
To mark the 300th anniversary of the founding of Providence in 1936, a new committee raised funds and interred the remains under a statue of Williams, dedicated in 1939, at Prospect Terrace.”

One last fun fact about Roger

One of the other fun facts about Roger is that no one really knows what he looked like. They have some statues all of which were different all of which were erected after Roger had passed on at the ripe old age of 80. They depict him today as a tall handsome man with chiseled features in his face and long hair. A bit of a nugget if you ask me. I think I have a time crush on him. I surely love his philosophy of Soul Conscience.

The Root! The Root!

Eventually we said our goodbyes to rangers Josh and Lauren and thanked them for the additional information on Roger. We were on a mission to see the root.
We made our way the 3 blocks or so to the John Brown house. We had arrived later in the afternoon. We walk into the house and there is a lovely lady dressed very upscale and looking like she would be in a Christie’s auction. We ask to see the root. The look on the historical lady’s face was priceless. She rolled her eyes and pointed to the garage and said, “You can find the root down there.” with a bit of distain in her voice. It was clear that she was not a fan of the root. We went down a couple of steps where the root was propped against a wall behind a screen sitting in a coffin shaped box. John’s response upon seeing the root was “Wow, somehow I thought it would be bigger.” That made me laugh. Then we started talking logistics on how hard someone would have to pull on the corpse to get that root out and do you think you just hold the head and pull? Do you think his head popped off?  Wouldn’t it be cool if we had some information on the person that extracted that root from Roger? So many questions without answers. Sometimes it’s just more fun to have the mystery.
I’m not sure why the root has not made its way to the NPS location and I didn’t ask. Clearly, it probably brings in visitors to the John Brown house. I know, because we took the tour.

The John Brown House was an impressive architecturally beautiful home. John Brown was a privateer that made a ton of money in import and exporting goods. I liked the squirrel logo. Apart from that, there wasn’t a lot to say.

If you want to learn more about Roger Williams the book titled “Roger Williams and the creation of the American Soul by John M Berry came highly recommended by the NPS rangers.
If you are around Providence go the park and the John Brown House. Tell Josh and Lauren I said Hey!

The link to the John Brown house: http://www.rihs.org/museums/john-brown-house/